Electrical system of a normal heart

The first electrical signal comes from the heart’s own natural pacemaker, the sinoatrial node, located in the upper right heart chamber. This node sends a steady stream of electrical signals along a pathway through the heart’s upper chambers. The signals then travel to the junction – the atrioventricular node – between the upper and lower chambers and, finally, move to the lower chambers. 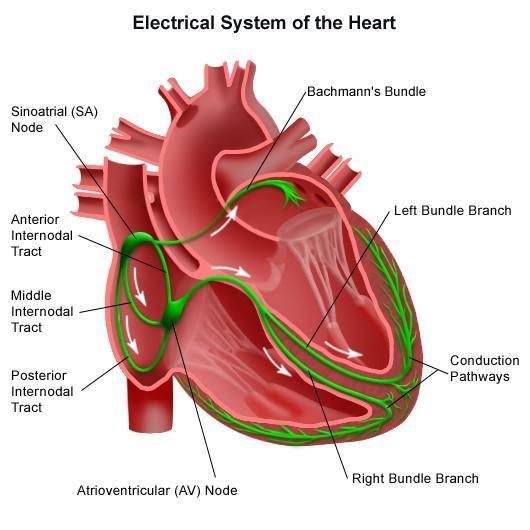 What is a pacemaker?

A permanent pacemaker (PPM) is a small device that helps your heart beat more regularly. It does this with a small electric stimulation that helps control your heartbeat. Your doctor puts the pacemaker under the skin on your chest, just under your collar bone. It’s hooked up to your heart with tiny wires. You may need a pacemaker to keep the pace of your heart beating properly. This helps your body get the blood and oxygen it needs.

A pacemaker is programmed to stimulate the heart at a pre-determined rate, and settings can be adjusted at any time. Routine evaluation ensures the pacemaker is working properly and monitors battery life, which generally runs from five to ten years.

Why would I need a pacemaker?

How does a pacemaker work?

A pacemaker uses batteries to send electric signals to your heart to help it pump the right way. The pacemaker is connected to your heart by one or more wires. Tiny electric charges that you can’t feel move through the wire to your heart. Pacemakers work only when needed. They go on when your heartbeat is too slow, too fast, or irregular. 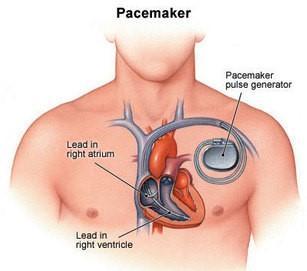 How do I live with my pacemaker?

What are the risks of procedure?

Risks associated with pacemaker implantation are uncommon but may include:

How do I prepare for a pacemaker?

To determine whether you need a pacemaker, your doctor might perform a variety of diagnostic tests, which may include:

Each of these tests evaluates the heart’s rhythm and pace to assess the need for a pacemaker. Should your physician diagnose an abnormality, a pacemaker may be recommended.

What is the process of implanting a pacemaker?

Usually, the procedure to implant a pacemaker can be performed with numbing medication and a sedative that relaxes you but allows you to remain aware of your surroundings. In some cases, general anesthesia, which puts you to sleep, may be used.

The procedure usually takes a few minutes but may take up to an hour. During surgery, one or more flexible, insulated wires (leads) are inserted into veins near your collarbone and guided, with the help of X-ray images, to your heart. The ends of the leads are secured to your heart, while the other ends are attached to the generator, which is usually implanted under the skin beneath your collarbone. Once the PPM is in place, your doctor will program it for your heart rhythm problem.

How long will I stay in the hospital after the procedure?

You may be discharged home the same day or may stay in the hospital up to one day after the procedure.

How do I treat my pain after the procedure?

After surgery, you may have some pain in the incision area, which can remain swollen and tender for a few days or weeks. Your doctor might prescribe pain medication. As your pain lessens, you can take non-aspirin pain relievers, such as acetaminophen (Tylenol) or ibuprofen (Advil, Motrin IB, or others).

When you’re released from the hospital, you will need to arrange for a ride home.

What are the short-term precautions?

You will likely be able to return to normal activities such as exercise, work and sex soon after you recover from surgery. Follow your doctor’s instructions. For four-six weeks after surgery, your doctor might ask you to refrain from:

What are the long-term precautions?

Problems with your pacemaker due to electrical interference are rare. Still, take precautions with the following:

Cellular phones and other mobile devices: It’s safe to talk on a cellphone but avoid placing your cellphone within 6 inches (about 15 centimeters) of your pacemaker implantation site when the phone is turned on. Avoid keeping your cellphone in the front pocket of your shirt.

Security systems: After surgery, you’ll receive a card that says you have a pacemaker. Show your card to the airport personnel because the pacemaker may set off airport security alarms. Also, hand-held metal detectors often contain a magnet that can interfere with your pacemaker.

Medical equipment: Let doctors, medical technicians, and dentists know that you have a pacemaker. Some procedures, such as magnetic resonance imaging (MRI), magnetic resonance angiography (MRA), and radiofrequency or microwave ablation can be done but it requires reprogramming of the pacemaker before the diagnostic testing.

Power generators: Stand at least 2 feet (0.6 meters) from welding equipment, high-voltage transformers or motor-generator systems. If you work around such equipment, your doctor can arrange a test in your workplace to see if the equipment affects your pacemaker.

Magnets: These might affect your pacemaker, so it’s a good idea to keep magnets at least 6 inches (15 centimeters) from your pacemaker site.

What is the battery life of my pacemaker?

The lithium battery in your pacemaker can last up to 8-12 years. The battery will be evaluated during regular checkups, which should occur every three to six months. When the battery is nearly out of power, your old generator is replaced with a new one during a minor outpatient procedure.

Notify your physician if:

Things you cannot do:

Things you can do:

Traveling with your device: