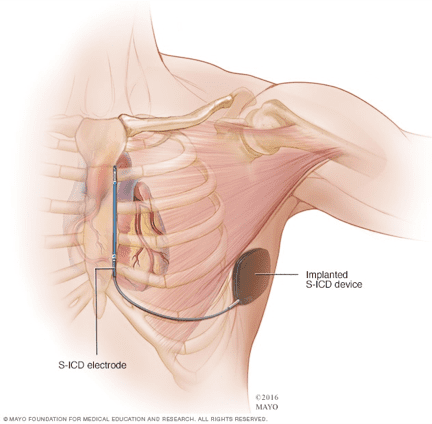 What is a Subcutaneous ICD?

A subcutaneous ICD (S-ICD), a newer type of ICD, is available at some surgical centers. An S-ICD is implanted under the skin at the side of the chest below the armpit. It’s attached to an electrode that runs along your breastbone. You may be a candidate for this device if you have structural defects in your heart that prevent attaching wires to the heart your blood vessels, or if you have other reasons for wanting to avoid traditional ICDs.

Implanting a subcutaneous ICD is less invasive than an ICD that attaches to the heart, but the device is larger in size than an ICD.

What does a Subcutaneous ICD do?

Much like the traditional implantable cardioverter defibrillators (ICDs), subcutaneous implantable cardioverter defibrillators (S-ICDs) are used to treat patients who have experienced or are at risk for ventricular tachycardia and ventricular fibrillation (life-threatening heart arrhythmias). These devices continuously monitor the heartbeat and automatically deliver a small electrical shock to the heart to convert a potentially lethal rhythm into one that will sustain life.

Unlike the transvenous ICDs, which utilize wire leads inserted directly into the heart through a large vein, the S-ICD system uses a subcutaneous (beneath the skin) electrode that rests near (but not in) the heart to both sense lethal heart arrhythmias and deliver therapy. The electric pulse generator is implanted just below the armpit.

How is the S-ICD implanted?

The implantation requires the patient to have general anesthesia but not X-ray fluoroscopy. The device’s pulse generator is placed right below the left armpit using a 4 to 5-inch incision.

An electrode attached to the device is tunneled across the ribcage above the heart and is anchored in place under the skin.

The S-ICD is tested while the patient remains under general anesthesia.

What are the benefits of the S-ICD?

The electrode that delivers the shock is placed near but not directly into the heart. This reduces the chance of infections. The design of this system allows for energy to be delivered (through the electrode) to the heart without the electrode having to touch the heart or its neighboring vessels.

The device’s electrocardiogram (mechanism that monitors heart arrhythmias) is potentially better at detecting shockable arrhythmias (ventricular tachycardia and ventricular fibrillation) and less likely to discharge in the event of a non-life threatening arrhythmia such as atrial fibrillation.

Additionally, the placement of the pulse generator under the armpit reduces visible incision scarring.​

Who is a candidate for the S-ICD?

The S-ICD device, which is about the size of a large box of raisins, is about twice as large as a traditional ICD, which makes some patients—especially those who are very thin— potentially ineligible. In addition, because the detection algorithm uses a virtual surface electrocardiogram, a small percentage of patients may not qualify for the device due to T-wave oversensing. The S-ICD also does not have standard pacing support or the ability to deliver anti-tachycardia pacing, so it would not be offered to patients with symptomatic bradycardia or who have slow ventricular tachycardia.

What are the short-term precautions following the procedure?

After the procedure, you will need to take some precautions to avoid injuries and make sure your S-ICD works properly.

You’ll likely be able to return to normal activities such as exercise, work and sex soon after you recover from surgery. Follow your doctor’s instructions. For four-six weeks after surgery, your doctor might ask you to refrain from:

What are the long-term precautions following the procedure?

Problems with your S-ICD due to electrical interference are rare. Still, take precautions with the following:

Cellular phones and other mobile devices: It’s safe to talk on a cellphone but avoid placing your cellphone within 6 inches (about 15 centimeters) of your S-ICD implantation site when the phone is turned on. Although unlikely, your S-ICD could mistake a cellphone’s signal for a heartbeat and slow your heartbeat, causing symptoms such as sudden fatigue.

Security systems: After surgery, you’ll receive a card that says you have an S-ICD. Show your card to airport personnel because the S-ICD may set off airport security alarms. Also, hand-held metal detectors often contain a magnet that can interfere with your S-ICD. Limit scanning with a hand-held detector to less than 30 seconds over the site of your S-ICD or make a request for a manual search.

Power generators: Stand at least 2 feet (0.6 meters) from welding equipment, high-voltage transformers or motor-generator systems. If you work around such equipment, your doctor can arrange a test in your workplace to see if the equipment affects your S-ICD.

Magnets: These might affect your S-ICD, so it’s a good idea to keep magnets at least 6 inches (15 centimeters) from your S-ICD site.

Patients also need to carry an ID card with them that can inform medical personnel of important manufacturer-specific details regarding the device.

Notify your physician if:

Things you cannot do:

Things you can do:

Most new PPM/ICD implants are now MRI compatible. If you need an MRI, please obtain clearance through your EP physician prior to ordering the MRI.

Traveling with your device:

What if I get shocked at home?